Of my great, great grandparents, James Brawley and Sarah McLaughlin’s ten children, James lived the longest. What must that be like to see eight siblings go before you? Only one much younger sibling survived him. Sadly, he also outlived his wife and two of his own children. In his 88 years he must have seen so many things and experienced so much.  If only he had written it all down.

James Brawley was born in Kilwinning, Ayrshire on 30 September 1866.  His other siblings were born in Lanarkshire so I assume his father had had to move to Ayrshire for a short time for work.  James was James and Sarah’s fourth child.  John was born in 1857, Elizabeth in 1861 and my great grandfather, Daniel in 1864.  At the time of young James’ birth, his father was employed in the ironworks as a furnace filler.  The family later moved to Newmains, Lanarkshire where they settled.

Life would’ve been tough for young James.  There were many mouths to feed and they lived in cramped conditions in housing provided by my great, great grandfather’s employers.  The 1881 census shows a fourteen year old James out of school and employed as a dye worker. 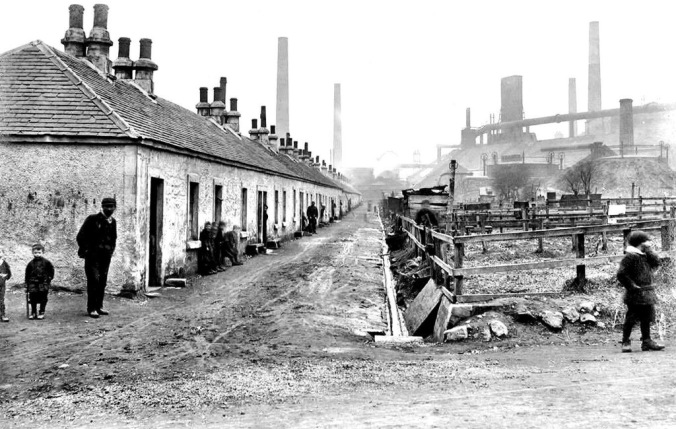 It appears then that James and my great grandfather, Daniel hatched a plan to seek their fortunes in America.  They left from Glasgow some time in 1887 bound for Pennsylvania.  The plan it would seem was to find jobs in the mining industry.  I’m assuming they must have responded to some time of recruitment ad but I havent been able to find any details of that. They were joined in Pennsylvania the following year by younger brother, Hugh.

James married Sarah McGlynn on 24 October 1889 in Kingston, Luzerne, Pennsylvania.  The couple went on to have eight children:

They moved from Pennsylvania to Wyoming where they settled in the town of Rock Springs in Sweetwater County.  The family were living in Rock Springs in 1903 when Hugh was born and James remained there until his death.

Over the years James would have received notifications of the deaths of is family.  Brothers John and Hugh both died in tragic circumstances in 1892 and 1895 respectively.  His father died in 1905.  I know that he did return to Scotland on at least one occasion.  He visited in 1910 and I imagine this would have been the last time he ever saw his mother who died in 1916.

It is hard to imagine how hard it must have been to be so far away from family, especially during time of bereavement.  His parents were illiterate so there would have been no letters from them.  I would hope that they may have enlisted help to communicate with their son but those letters would surely have lacked the personal touch.

In 1930, at the age of 64, James was still working as a coal miner.  Moving to America might have given him greater opportunities but it wouldn’t have been an easy life.

His wife died in 1937.  In 1947 he lost two of his children.  Hugh died in an accident in California.  I know from records that Elizabeth also died that year but I have been unable to find details of her death.  I do know that she was married and her name was Salardino and that she was buried in Colorado.

James died in 1955 at the age of 88 which is pretty good going in my family.  The cause of death is given as pneumonia following a heart attack.  He did have to face tragedy but I would like to think he knew joy in his life.  He had his children and many grand children.  Prior to his death he was living with his daughter, Mary Colleen and her husband.  His obituary on the Find A Grave site suggests he was loved by many.