Daniel Brawley and Ellen Keenan were my great grandparents. I don’t remember being told many family stories but the one that did stick in my mind is that my mother’s grandparents got married in Scranton, Pennsylvania.  There was no explanation given as to why they were in America and it seemed no one really knew the story. It has taken a while to get to the bottom of this and I really can’t tell you about one without the other so this is the story of my mother’s paternal grandparents.

Daniel Brawley was born on 1 May 1864 in Old Monkland, Lanarkshire.  His parents were James Brawley and Sarah McLauchlan.  Daniel was the third of ten children.  The family eventually settled in Newmains, Lanarkshire.

My great granny was registered as Helen Keenan but was always known as “Ellen”. She was born on 16 December 1869 in Newmains. She was the eighth of ten children. Her parents were Patrick Keenan and Agnes Haughey.

Life would not have been easy. Their living conditions were poor and, as can be seen from the photo, hardly adequate for such big families.

I recently discovered that in her early teens Ellen was forced to leave Newmains and her parents to take up employment as a bleachfield worker in Paisley. She would have been away from her family for months at a time.

Daniel found work at the local ironworks as a labourer. Coltness Ironworks was the main employer for the local community and the reason the Brawleys settled in Newmains.

So Daniel and Ellen both grew up in Newmains and the families would most certainly known each other from the time the Brawleys arrived in the village. So my question was – why did they marry in the United States? This was not a time of destination weddings after all.

I started digging and I discovered a second cousin who was also looking for Daniel and Ellen. Her grandfather was Daniel And Ellen’s first child, Daniel. The story in her family was that her grandfather was born in Pennsylvania. He returned to Scotland with an American accent and was bullied by local children as a result. My cousin had managed to track down Daniel and Ellen’s marriage record showing that they were indeed married in Scranton, Pennsylvania. The date of their marriage was 11 December 1888. Neither of us, however, could track down a birth record for Daniel.

I also checked through passenger lists for Daniel and Ellen trying to work out when they left Scotland with no success.

The next record I found was the 1891 census which showed the couple back in Newmains and living at 12 Furnace Row. Daniel is again recorded as a labourer. By this time the couple had had another son. I found the birth record for James who was born in January 1891 at 12 Furnace Row.

I started to suspect that Daniel had not been born in the USA after all but there was no record for a Daniel Brawley in Scotland either. So I had to try a different search and I found him.

Daniel Keenan was born at 15 Furnace Row, Newmains on 30 October 1887. He was given Brawley as a middle name but he is recorded as illegitimate and there is no father listed. So, this was not the great romance I had imagined of a young couple heading off to America to start a great adventure. It would appear that Daniel was keen to leave Newmains but he did so with his brother James and not his young girlfriend. Ellen, it would seem, was just a fling before he headed off for good. Had they intended to stay together surely they would have married before he left if her pregnancy had meant she was unable to travel. So I’m assuming (hoping) that he didn’t know she was pregnant when he boarded his ship. Knowing the baby’s birth date narrowed down the timeframe for Daniel’s departure but I still don’t have a passenger list. I did ask a professional genealogist who advised that many records from that time no longer exist.

Daniel’s ultimate destination was the town of Moosic. I’d love to know what drew the brothers to that particular place. Perhaps they responded to a recruitment advert or maybe they had a family or other connection there. It’s possible there were other Newmains men already there. 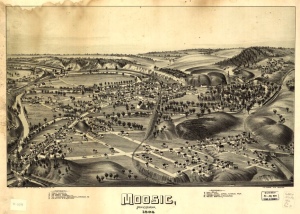 Ellen was not prepared to remain a single parent. As soon as she was able she and Baby Daniel sailed on the Steamship Manitoba heading for Moosic, Pennsylvania. The name was transcribed as “Keauan” which made it difficult to find. Also on the ship was Daniel’s younger brother Hugh. I can imagine the Brawley and Keenan families getting together to discuss how to deal with the situation. If Daniel couldn’t or wouldn’t come back, Hugh would accompany Ellen to track him down. The Manitoba arrived in Philadelphia on 9 December 1888 and Daniel and Ellen were married just two days later. You can see from the marriage record that Ellen lied about her age.

Why did Daniel and Ellen return to Newmains? I suspect (and young Daniel’s family believe) that it was Ellen who wanted to come back. She couldn’t settle and missed her family. It wouldn’t have been easy for her with no friends or family support. She would have been left on her own while her new husband and his brothers worked long hours in the mines. I don’t know exactly how long they were there but it is unlikely that Daniel would’ve had an American accent. The couple went on to have twelve (!) children in total. They remained in Newmains until their deaths; Daniel died in 1935 and Ellen in 1941.

They are buried in Cambusnethan Cemetery. I have visited their grave and was saddened to see there is no headstone. The small marker in the picture had been moved from another plot.

The photograph below was taken in 1912 and shows My great grandfather with his eldest son. I do not have a photograph of Ellen.

13 thoughts on “A Family Mystery — Daniel Brawley and Ellen Keenan”