My grandfather Hugh Brawley died on 4 May 1968 when he was 69 years old. He died at his home address at 32 Crindledyke Crescent, Newmains where he lived with his wife of 48 years, Catherine Cosgrove. His death record shows that he was a retired crane driver. He is buried in Cambusnethan Cemetery.

Hugh was born on 25 March 1899 at 8 Store Row in Newmains. He was the 7th of 12 children of Daniel Brawley and Ellen Keenan.

Like me, my grandfather was baptised in St Brigid’s Parish. His godparents were his aunt and uncle, Matthew Brawley and Mary Hagan. You can see that at the time the parish registers were still recorded in Latin.

I don’t think my grandfather had the easiest of childhoods. His father had dreams of living in America and indeed, he did go to America along with his brother but the dream was short lived and he found himself back in Newmains married to a woman he had never really intended to make a life with. you can read more of my great grandparents’ story here. Daniel was a drinker and by all accounts could be violent. There wasn’t much money around and the family would have struggled to make end meet. It’s no surprise then that 5 of Hugh’s siblings left Scotland looking for a better life. While the previous generation had chosen the United States, my great aunt and uncles went to Canada.

Below we find the family on the 1911 census when they were living in Main Street, Newmains. You’ll see that 3 year old Agnes is the only female child in the house. Her elder sisters Agnes and Elizabeth had died in infancy. It seems strange to me that they named a child after her dead sibling but it was commonplace then. She was really named after her maternal grandmother, Agnes Haughey whose name Ellen would have wanted to remain in the family. The census shows that sister Sarah was living with her grandparents close by in Brown Street. I assume it was due to lack of room that Sarah moved out of the family home. 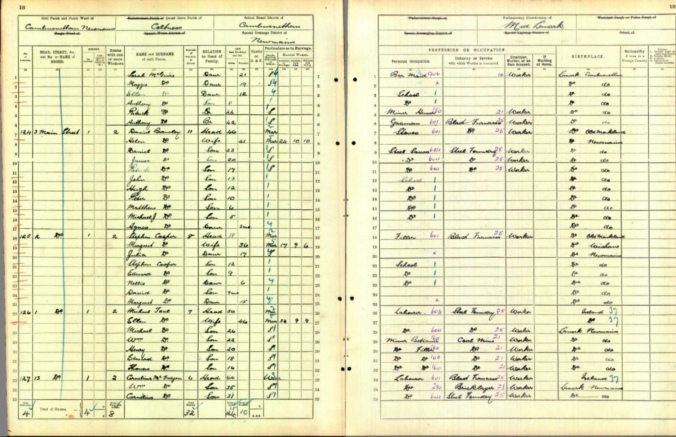 Hugh lived through the Great War and saw his brothers go off to fight. Due to his age he did not join the army until later on and, according to my mother, he never saw active service.

My grandfather loved football and was a promising player. There’s a story that Newmains had a football team made up almost entirely of Brawleys which would make sense given the number of Brawley boys in the village at that time.

On 6 August 1820 Hugh married my granny, Catherine Cosgrove. I love this photo of them which I believe was taken when they got engaged. How young they look!

At the time of their marriage Hugh was employed as a labourer at the local Iron Works. The couple had 5 children. At the time of his death Catherine and Hugh had 15 grandchildren. I was not one of the 15 as sadly, my granda died before I was born. I would love to have known him. Today I’ll be visiting the cemetery and thinking of him.