I spent this weekend in Dundee. The main purpose of the trip was not family history but since we were there anyway it was much too good an opportunity to miss. I don’t have strong family connections to Dundee in that none of my family were born or raised there but it is in Dundee, or Lochee to be precise, where my great grandparents, Patrick Cosgrove and Sarah Helferty met and were married.

The marriage record shows that Sarah was a jute mill worker. Living in Whorterbank means she would have been employed by the Camperdown Works. To find out more about the lives of the mill workers we visited Verdant Works which is a wonderful museum set in a former jute mill. You can click on the link to find out more about the museum and I would highly recommend a visit. We were lucky to meet Lily, a former mill worker who at 80 is now a museum volunteer. She told us stories of her days in the jute mills and the conditions she experienced. She showed us the machines that were used and when she got the machines working we briefly experienced the noise that my great granny would have endured maybe ten hours a day.

Patrick and Sarah were married in St Mary’s Chapel, Lochee in 1888 and I was delighted to discover that St Mary’s was built in the 1860s and still exists! I should have planned ahead but I wasn’t sure we’d make it to Lochee as I hadn’t realised how close it is to the centre of Dundee. We decided to go and take a look and maybe get some photos of the exterior of the building.

Mass had been celebrated earlier in the day and the church was locked up but when we were wandering round we met a lady in the car park who asked if we were lost. We told her why we were there and she said that the church is indeed locked out with Mass times but that the parish priest was at home and might let us have a look. So we knocked on the door and were warmly welcomed by Father Cassidy who was happy to show us this beautiful church and tell us a bit of the history of the parish and the local area.

The mill, the church and the street where Sarah and Patrick were living are all within minutes of each other. The area then was known as Tipperary or Tip due to the amount of Irish immigrants living there. Sarah was born in Glasgow but of Irish parents and would have considered herself Irish. Patrick was from County Longford.

Father Cassidy was happy to let us take some photographs. The altar is not exactly the same and would have had a wooden altar rail but it is easy to imagine how it would have been when Patrick and Sarah made their vows. 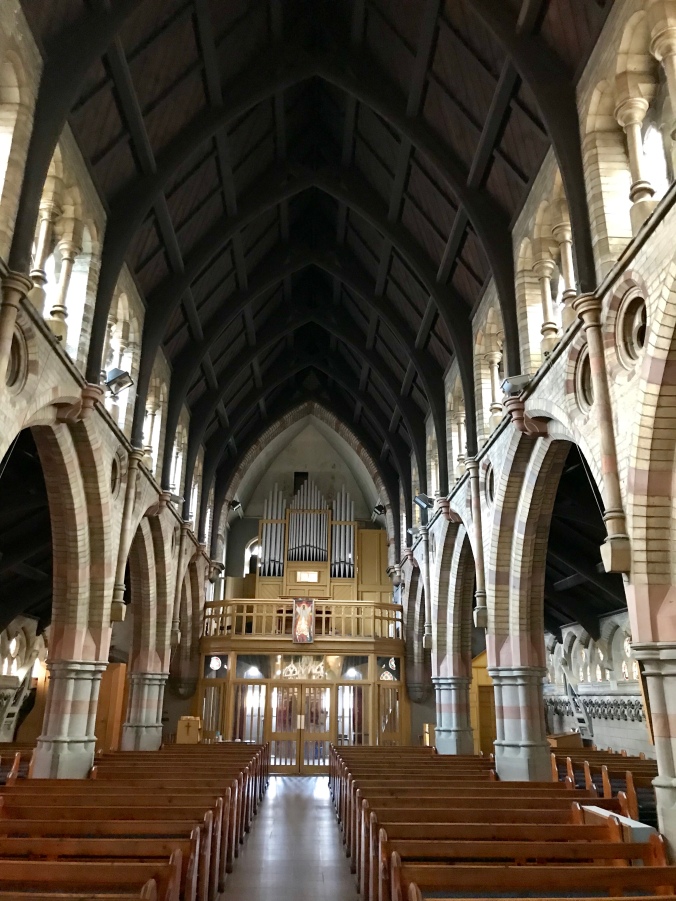 Isn’t it beautiful? I found it quite moving to be in the exact spot my ancestors stood over 130 years ago.

The exterior of the building has changed over the years and Father Cassidy explained that the central doors are a newer addition and it would have been through the door to the right that the bride and groom would have entered the church.

The mill no longer exists but “The Stack” is still a famous landmark in the area. Cox’s Stack is a 282 feet (85m) chimney that formed part of Camperdown Works owned by the Cox brothers. It was built in 1866. The mill employed over 5000 workers at it’s peak.

The Stack is an impressive sight and one that my great grandparents would have known well. It was great to feel that connection.