Finding my grandfather, Hugh Brawley on the Poor Law records for North Lanarkshire made me feel really sad. I didn’t get to meet him but he is not someone from the dark and distant past so knowing that his family was struggling so badly is really quite hard.

Again I have found information on these records that I wouldn’t otherwise have known. In January 1901 my great grandfather, Daniel was suffering from sciatica and unable to work. The record shows he had 5 dependant children. His eldest child , Daniel was only 14 but was already working so is not listed. I doubt very much that the family had savings but they were receiving some money from the Coltness Ironwork Friendly Society. This is something I hadn’t heard about before. It clearly wasn’t enough to cover the family expenses which included rent of 11/6 per month for their two apartment home on Main Street, Newmains.

Shortly after Daniel made his application for relief he was sent to recuperate at Dunoon Convalescent Home. I can only assume that this was organised and paid for by his employer. I wonder how long he spent there and what kind of treatment he received. It makes me want to know more about the Ironwork and how staff were treated in general. So many of my family worked (and in at least three cases died) there that I really should find out more about the company. 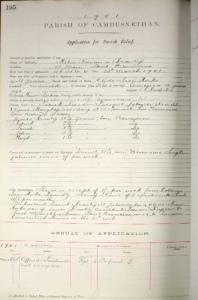 While Daniel was enjoying his break by the sea my great granny was struggling to feed the family and had to go to the parish looking for help. It wasn’t as simple as asking for and receiving money. Helen was offered admission to the Poorhouse. Her refusal would have shown she wasn’t desperate enough. I’m relieved my grandfather and his family never had to suffer that.