I first came across Margaret Brawley on the baptismal register of my 3x great Uncle, John Brawley. She is listed along with Peter McColl as godparent. That was in 1833. From there I looked for her in other records and found a marriage record from 1825. Margaret Brawley and Peter McColl were married in St Andrew’s Parish in Glasgow. Fortunately the parish liked to add a bit of background information on the bride and groom so I know that Margaret was from the town of Faughanvale in County Derry, Ireland.

The Christening that I mentioned took place on 3 November 1833. Given that Margaret was godmother to my great great grandfather’s brother I assumed that she is family and given the dates and where she comes from I believe that she was the younger sister of my 3 x great grandfather, John Brawley.

I wanted to find out more about Margaret in the hope of finding out more about the Brawleys and how they came to be in Glasgow at that time. The 1820s is the earliest I have found any of my Irish ancestors in Scotland. I couldn’t find any record of her or her family. There was no trace in the 1841 census in Scotland. Now Glasgow at that time was not an especially pleasant place to live and particularly for Irish immigrants so I thought there might be a possibility they had returned to Ireland. I was wrong. By the time of the 1841 census Margaret was on the other side of the world!

In December 1833, just a month after celebrating a happy family occasion, Peter McColl and Margaret Brawley were convicted of the crime of reset and sentenced to 14 years transportation to Australia. Having discovered this shocking news I checked the newspapers to find out more about the crime but all it merited was 3 lines in The Scotsman.

So what was the story? To find out more I visited the National Records office in Edinburgh. It is a fabulous place to visit. After requesting the required records I waited in anticipation for these original documents which are almost 200 years old. It really is a privilege to be able to hold and view these papers. I was pretty excited. I had it in my mind that her crime was one of desperation and that she had come into contact with stolen property purely as a means to support her family.

First of all there was a letter dated 20 December 1833

Two women of the town having been convicted in the Police Court of the theft of two watches which they had been given by Peter McColl a notorious resetter of stolen goods I ordered the Criminal Officers to search McColl’s premises for the stolen watches. He was just preparing to set off for Ireland when the search was made and a variety of articles were taken possession of in his house by the Criminal Officers. ”

So, Peter McColl was a known criminal. Whether this was by reputation or from previous convictions I do not know. He was a publican owning a pub in the Briggait area of Glasgow.

There was plenty more to come though in the statements that followed.

“John Christie, Police Criminal Officer residing in Deanside Lane, Glasgow declares that he was one of the party who searched McColl’s house on the eighteenth current that the object of their search was to recover two watches, and they, as it were by accident, found the articles now in the Courthouse which corresponded with the description of other stolen property as to which they had received information and most of which had been identified and claimed accordingly. That the two pieces of plain muslin were rolled up as a bundle under a bed, the metal tied up in a towel in a window shelf and the table cloths, towels and other articles were in chests of which Mrs McColl had the keys. That Mrs McColl said she had had the table cloths and towels more than two years but she declined to say from whom she had got them. That or information as to the two pieces of plain muslin she referred to her husband but as to the piece of lappet muslin she said that it had been left by a woman in payment of some whiskey. As to the piece of ? cloth that it had been in the house for a number of months and with regard to the two testaments that she had had them for a considerable time. That the only account she gave of the metal was that the boys had had it melting on Halloween.”

Among the witnesses reporting the theft of property was the beadle of the Church of St George in the Fields. He spoke to the theft of altar cloths and communion cups. Similar items as well as bibles and hymn books had been stolen from the chapel in Partick. The metal found in the house was from the melted communion cups. Given the victims, it was unlikely that Peter and Margaret would be shown much sympathy by the courts.

Peter was not at home at the time of the search but he was later questioned in relation to the recovered property. He denied any wrongdoing and claimed, as Margaret had, that most of the property had been in the home for some time. As to the bibles he said that he could not read so could not explain why they would be there. He most certainly said nothing that would help Margaret.

It was somewhat disappointing that the records provided antecedents for Peter but there was no mention of Margaret’s background. She was just the wife of Peter McColl. Neither is there any mention of the children.

Margaret and Peter were detained in the Tolbooth prison just a short walk from their home until the time of their trial. The prison no longer exist but the Tolbooth Steeple still stands. You can read more about it here. Both were convicted and sentenced to 14 years in Australia. On 27 June 1834 Peter set sail on the ship Henry Tanner. On 22 July Margaret sailed on the George Hibbert. The record shows that she had one child with her. She was one of 144 female convicts on the ship. You can read more about the other passengers and the voyage by clicking here.

It is fascinating to see the records from that time. We can even see a physical description of the prisoners. Margaret has sandy hair and hazel eyes. She has brown skin which is a little pock-pitted and a thin nose. She has lost two front upper teeth.

During the voyage Margaret required to see the ship’s physician. The notes are in typical doctor handwriting but it appears she was suffering with conjunctivitis and headaches. 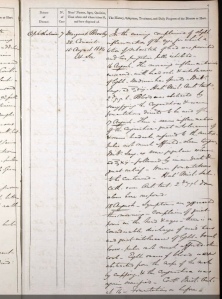 She survived the voyage and arrived in Australia on 1 December 1834 where she was sent to Maitland to serve her time. I do not know if she ever saw Peter again. It is likely that during her time she was engaged in domestic service. I do know that she didn’t completely accept her fate and in 1837 she attempted to escape.

i wonder if it was a spur of the moment decision to leave or if she had worked out a plan. Could she have made connections who might have helped her. In any case she was unsuccessful.

In 1848 Margaret received her certificate of freedom. After 14 years in Australia she had served her time. 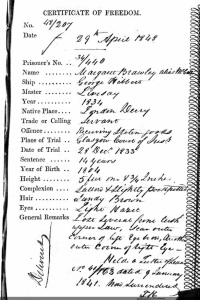 I would love to know more about what happened to Margaret after this time and what type of life she lived as a free woman. I haven’t found any records of her death. Peter also completed his sentence. There is a record of a Peter McColl in an insane asylum but I can’t be sure it’s the same person.

I have recently heard about a project by the Maitland and Beyond Family History Society who are making bonnets for all the female convicts who were connected to Maitland. Margaret’s name has been embroidered on one of the bonnets which are of the style worn by the women at that time. The project seeks to honour their lives, struggles and contributions to the early settlement of Maitland.

Margaret was convicted of a crime. Having read the statements I can’t help but think that it was her husband who was the real criminal and that Margaret tried to cover up his crimes. She left Ireland for a better life in Scotland but ended up on the other side of the world away from her family and everything she knew. I have yet to discover what happened to her children. The punishment seems harsh but she survived. This is a story I certainly did not expect to find on my family tree.